Kansas City, MO. Jan 16, 2019– Discriminating Thieves: Nazi-Looted Art and Restitution follows the journey of four works of art that were once in the hands of the Nazis. The exhibition opens Jan. 26 and explores the circumstances surrounding their thefts, their return to their rightful owners, and their subsequent legal acquisition by The Nelson-Atkins Museum of Art in Kansas City.

During World War II, Adolf Hitler and the Nazis looted art on an unprecedented scale. They stole thousands of objects across Europe between 1933 and 1945, keeping art for their own collections or stashing art for use in the museum Hitler planned to build. Other works, considered by the Nazis to be immoral, or “degenerate,” were destroyed, sold, or used as Nazi propaganda. 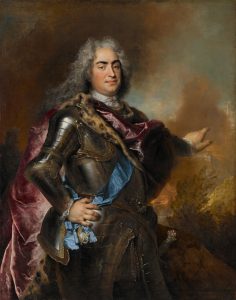 “This exhibition was extensively researched by MacKenzie Mallon, the Nelson-Atkins provenance specialist who is gaining a national reputation for her work in this important field,” said Julián Zugazagoitia, Menefee D. and Mary Louise Blackwell CEO & Director of the Nelson-Atkins. “This is very specific and painstaking research into ownership that is of utmost importance in the museum world and uncovers fascinating stories of the journey this art has traveled.”

Most of the looted objects were recovered by the Allies after the war, many by a group of art curators and scholars known as the Monuments Men. Paul Gardner, the first director of the Nelson-Atkins and himself a Monuments Man, described his journey to an Italian castle that had once housed an important art collection, and his dismay at finding that the Germans had reached it before him. Gardner wrote: “The custodian told us that experienced German officer-experts had systematically broken open all the bales and boxes, and had taken the cream of the collection. The Germans have proven all along to be discriminating thieves.”

The focus exhibition is comprised of four works of art: Augustus the Strong, Elector of Saxony and King of Poland by Nicolas de Largillière; Still Life with Guelder Roses by Pierre Bonnard; Jean-François Ducis, a sculpture by Augustin Pajou; and Masks by the German artist Emil Nolde.

De Largillière’s Augustus the Strong was among the works of art stolen by the Nazis and intended for Hitler’s museum of the future, the “Führermuseum,” which he imagined would be the greatest art museum in the world. 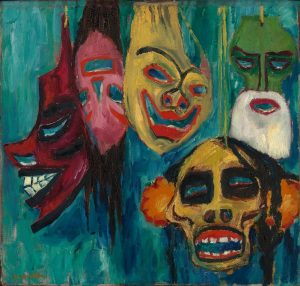 Emile Nolde’s Masks, however, was declared “degenerate” because of its modern, expressionistic style, even though Nolde was a member of the Nazi party. It was removed from the Folkwang Museum in Essen, Germany in 1937 and given to a German art dealer, Karl Buchholz, to sell. The painting remained in his possession throughout the rest of the war, and he transferred it to a New York art gallery following an agreement among German museums not to pursue the restitution of “degenerate” art that had been sold abroad.

“Masks remained in that gallery until the Nelson-Atkins purchased it in 1954,” said Mallon, Specialist, Provenance. “There is a human story behind each of these objects, and uncovering that ownership history is the purpose of provenance research. I think it’s important to remember the very personal cost of Nazi art looting during World War II and the subsequent return to the owners or their descendants and the museum’s legal acquisition of the works.”

Through a special guide, visitors to the exhibition will be encouraged to find other works of art in Nelson-Atkins galleries that have similar, interesting histories from World War II.

Special programming related to this exhibition includes a talk by Mallon on Jan. 31, What Once was Lost: Nazi Art Looting and Allied Restitution. Mallon will discuss Nazi art looting during World War II, the recovery of much of the stolen art by the Allies, and how these stories intertwine with the history of the Nelson-Atkins collection. Mallon will also give a talk on Oct. 3, Safe Haven: the Nelson-Atkins and the Protection of Art during World War II. On March 7, art historian and director of the Smithsonian Cultural Rescue Initiative Corine Wegener will give a talk, The Monuments Men and Beyond: Saving Cultural Heritage in Today’s Conflicts, sharing her insights into the role of museums in the development of the Monuments Men, the importance of provenance research in museums today, and how international law can help protect heritage in today’s conflicts.

Three films will be shown in conjunction with this exhibition–Hitler Versus Picasso and Others March 15 and 16, The Rape of Europa March 22 and 23, and Woman in Gold March 29 and 30. All films are in Atkins Auditorium.

Discriminating Thieves: Nazi-Looted Art and Restitution features an interactive through which visitors can follow the trail of each work of art in the exhibition and discover the personal histories uncovered by the museum’s provenance research. The exhibition closes Jan. 26, 2020.

The Nelson-Atkins serves the community by providing access to its renowned collection of more than 41,000 art objects and is best known for its Asian art, European and American paintings, photography, modern sculpture, and new American Indian and Egyptian galleries. Housing a major art research library and the Ford Learning Center, the Museum is a key educational resource for the region. In 2017, the Nelson-Atkins celebrates the 10-year anniversary of the Bloch Building, a critically acclaimed addition to the original 1933 Nelson-Atkins Building.